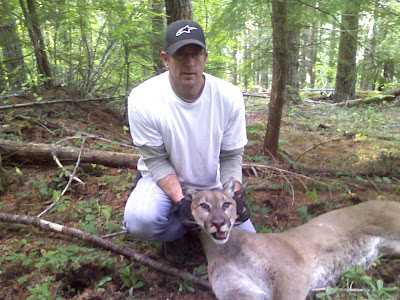 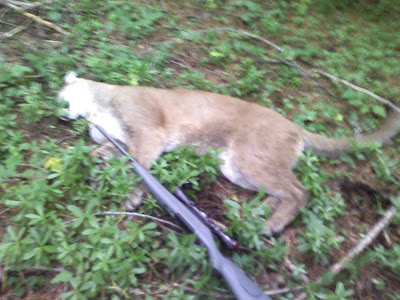 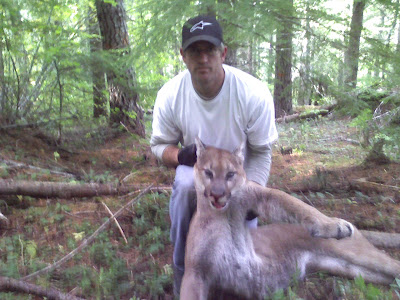 Blogging friends meet my sweet husband, Steve. I'm going to let Steve tell the story in his own words...


I was by myself in a heavily treed unit following what we believed to be two bull Elk while two others in our party were around an 1/8th to 1/4 mile away pushing the same direction. I heard a slight noise which sounded like an old tree groaning, but it didn't sound quite right. There was no wind and I hadn't heard anything like that all day. It worried me a little as I had heard that there was a bear in the area and also because I have always had a strong (I say healthy) fear of Cougar.
I had been crawling in the underbrush for quite a while and could hear my heart beat in my ears so I questioned myself a little. Just in case, and also because nobody was watching, I pulled my Remington .270 off of my shoulder and held it in both hands with my thumb on the safety. While continuing to follow the confused tracks of this Elk, I heard my radio crackle and held it next to my ear. I heard broken talk of our party having put down a five point within a couple of miles of where I was. This more than likely meant that the current hunt was over as it would mean all of us going into the brush to retrieve the downed Elk.


I turned downhill at a slightly faster pace heading for the gravel forest service road which was below me about 50 - 75 yards. As I was stepping over a small log I caught motion to my left side. Unbelievable! A 175 pound Tom (male) Cougar jumped out of the brush at me. The Cougar would have been coming at my back left shoulder, but in stepping over the log I had turned and caught the motion. Thank God as it was completely silent, amazingly silent! A ton of thoughts flooded my head as I turned my rifle. I had only time for one shot and it had to be from the hip. I caught the cougar in it's second step in the chest and it buckled immediately. I don't know how it happened but a second bullet made it's way into the chamber of my bolt action rifle and this time from the shoulder I shot the Cougar, as it was crumpling, in the center of the top of it's head. Crazy, absolutely crazy. The animal I most fear in life lay dead at my feet. I paced of 18 yards between me and the cougar where it was first shot. The pictures of the Cougar above are all within an hour of this happening. The picture of my rifle laying at it's feet was moments after I shot it, it is blurry because of my hand shaking. I am just happy I'm still alive, that thing looked hungry.

I'm glad too honey! I told Steve that I was going to start calling him Coug:) The reality that Steve seriously almost died on Sunday hit me when I saw these pictures yesterday.
To give you an idea of how big this cat was, it's paw was bigger than my 11 year old (well, 11 in 2 weeks) son's hand! It was 7 feet long from head to tail. I truly believe that the fear, although funny, that my husband had of cougar was instilled in him by God for a reason, it saved his life! Again, thank you Jesus!!