'Fro Me To You

For more 'Fro posts go to We Are THAT Family's blog and check 'em out!
I'm currently taking a creative writing class which is why I haven't been blogging as much lately, no time! Anyhow, it's my final week and our assignment is to write a personal essay. I wrote "Our Love Story." While I was writing it I thought maybe I would post it on my blog. So today's 'Fro Me To You isn't embarassing like usual:) It's sweet, my husband. Isn't he so handsome!! 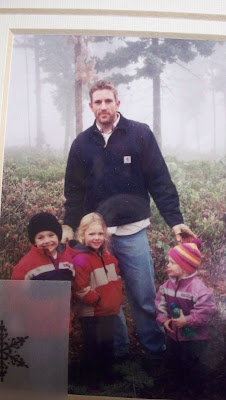 I love, love this picture. Actually if you didn't notice, it's a picture of a picture. I have a scanner but it isn't connected to this computer:( LAME!

We were up huntin' a Christmas tree when this was taken.

From left to right: Austin, Elli (my sissy), and sweet little Abbie.

It was as if my heart led my eyes to look in his direction, so it could leap and set butterflies free in my stomach. The first time I saw my handsome prince he was walking into the room with a girl around my age, who as it turns out was his younger sister’s friend, but I was instantly jealous. I had no reason to be, I didn’t even know who he was. Still, for reasons unknown to me my heart longed for him in ways that were beyond my years.
He was tall and oh so handsome, with strong arms, broad shoulders and kind eyes. He reminded me of a J Crew model, a little bit rugged but clean cut at the same time. I could tell by the way he carried himself that he didn’t even realize his charm, which made him all the more beautiful to me.

He was different from any of the guys that I normally attracted. Somehow I usually ended up with the guy who thought treating girls with disrespect, cruelty and regularly cheating on them was the way to their hearts. Not this guy, he opened the door for all women, not just the cute ones. When he would talk to me, he spoke respectfully in a non condescending way making me feel like what I had to say truly meant something. Other than from my dad, I had never experienced this sort of sweet kindness from a guy.

We became friends through my mistake of a boyfriend at the time. For years I watched this Mr. Handsome from afar, whose name I found out was Steve, never revealing my feelings for him to anyone. You see, I never dreamed in a million years that he would feel the same, not to mention we are eight years apart. So, I pushed my feeling aside, telling myself that it was just a crush that would go away eventually. We became the best of friends over the years, but simply friends.

We had been friends for two years when Steve took me aside and asked if he could talk to me for a minute. My heart sank because in my immature mind I just knew he was going to tell me that my boyfriend wanted to break up with me. Looking back on this now is humorous, but that sinking feeling that I had was very real. The sinking feeling quickly left me to be replaced by panic when I heard the words that he was really saying, and they had nothing to do with my boyfriend.

“I’m going to ask you something and it isn’t easy for me.” He said. My mind at this point is racing with thoughts of what in the world could he want to ask me? Why isn’t it easy for him? What could it be? What could it be? I sat there without saying a word, feeling glued to the bench where we sat while my mind was jumbled with questions. He continued, “I have feelings for you like I’ve never felt for anyone, and my question is, do you feel the same?” Stunned by what had just happened I could feel face tingling as if preparing to go numb. Without thinking before I spoke I blurted out, “Yes, I do.” I wanted to die of embarrassment, what had I just done. Then we both sat there in silence for what seemed like forever, pondering what to do next. I had a boyfriend and Steve was 8 years older than me for goodness sake! Then, before I knew it we were kissing. A sweet, gentle, kiss and he had whiskers! I wasn’t used to whiskers, I remember thinking to myself, “I’m kissing a guy with whiskers. Oh. My. Gosh!” That’s when I pulled away and said, “We can’t do this, this isn’t right.” He reluctantly agreed, seemingly angry at himself for even saying anything at all.

Things were awkward between us over the next couple of years. We remained friends, but it was hard to make eye contact without seeing in each other’s eyes the longing. It turns out my cancerous boyfriend had been cheating on me for the entire 4 years of our relationship. Finally, after realizing how absolutely ridiculous it was that I had wasted 4 years of my life with a person whom had manipulated, used and abused me I decided to not waste anymore time. So, I ended it.

TO BE CONTINUED TOMORROW...

Email ThisBlogThis!Share to TwitterShare to FacebookShare to Pinterest
'Fro Me To You
2009-01-22T14:46:00-08:00
Takin' time to smell the flowers!
family|Fro me to you|Our Love Story|
Newer Post Older Post Home