I got crafty like I said I would, I painted, stuffed and stapled and here's what I finally finished. 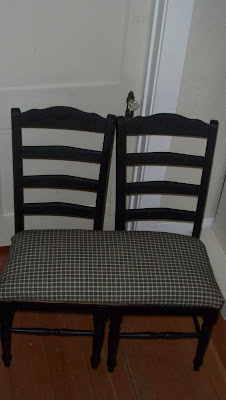 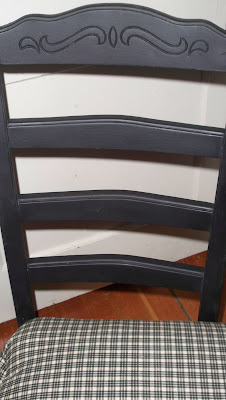 It turned out pretty cute, we use it at our table...I'm going to paint the other chairs black also, but one thing at a time.


The same day that I finished this bench, my sweet son and I cleaned the garage as a father's day gift to Steve:) I threw my back out a bit, but not enough to not ride the HOSS.

And so I did. After all the hard work CRAFTING and CLEANING I went out to see my Bailey... 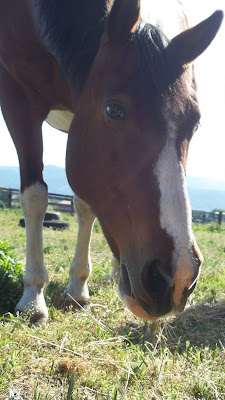 I lunged her, and then decided to hop on, BAREBACK. She's slicker than snot because of the fly spray I've been using, but I stayed on just fine. No children were present so the place was dead silent. It was so nice I decided to give her a treat and ride outside of the fences:) As soon as I opened the fence she got excited.
I had a strange feeling that it wasn't a good idea, but I continued on, ignoring my intuition. Why didn't I listen?
She's always really alert in a new setting and so we were taking it slow. Then...all of the sudden she and I heard the sound at the same time. Jon (my friends husband), who was working under his truck, quickly slid out from underneath on his creeper. It scared Bailey half to death! She jumped one way, and I slid off the other. Right onto my Bud-unk-a-dunk. I weakly called for Jon, worried Bailey might run off. But she didn't, she patiently waited above me, by my side. He ran over asking if I was okay. I wanted to cry, but I didn't I slowly got up and asked if he could take her back to the field for me. I knew I had hurt myself pretty bad. Well, I CRACKED my tail bone. Can you even believe it!? This isn't the first time I've done this, I did it once before riding ATV's, or rather wrecking ATV's:0
I'm alright though, I'll live. It'll just take a week or so to get in the saddle again:)