Friends and Family Friday, MY BROTHER... 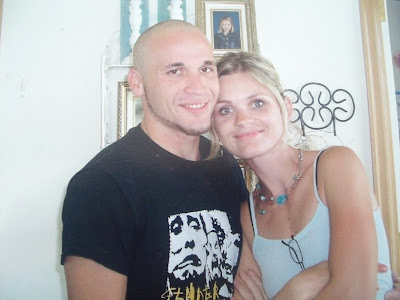 Us Now ^ and
Us then 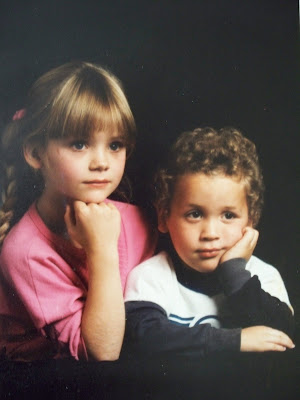 AWWW! Aren't we cute. Seriously he is the cutest little thing. You see that scratch on the side of my eye, I'm pretty sure that's a war wound from that cute little brother of mine.

Today I’m going to introduce you to my little brother, his name is Sean; we’re almost 4 years apart. Even though my sweet little brother is all grown up, I still see him as that little boy with a slight afro running around the house screaming because our bird, BIRDIS, was perched on top of his head and BIRDIS was not letting go. (We were very creative when it came to naming animals; we also had a dog named REJECT. Please don’t judge. I realize it’s becoming obvious that we come from a bit of a redneck family.) Oh my goodness I have hundreds of hilarious stories that I could tell you when it comes to my brother, but don’t worry I’ll keep it to a minimum.


One thing really quick that I wanted to share about my brother is that at one time in his life he was addicted to Meth. It was one of the scariest, most horrible times in all of our lives. To see someone go through that is like watching them die right before your eyes. Miraculously God delivered my brother from this horrible drug and Sean has never looked back. You would never be able to tell that he did this drug physically or mentally. God has an amazing plan for my brother's life and I'm so thankful that he's alive today!


ME: say hello to my bloggin' friends Seanny.

ME: Sean, how many tattoos do you have?

ME: Do you regret any of them?

ME: How would you describe yourself to a stranger?

ME: Can you be more specific:

SEAN: Like what? (at this point he's starting to get kind of imbarrassed, like maybe you can actually see him doing this interview, very funny!)


ME: What celebrity do people most often say that you look like?


ME: The Rock? Who’s told you that you look like THE ROCK?


SEAN: Okay I’ll go with that.


ME: Are you still mad about your 16th birthday?

NOTE: I had the bright idea of making Sean think that he was actually getting a car for his 16th birthday, so I bought a toy car and “parked” it in the driveway. After he opened all of his gifts we blindfolded him and told him he had one last one. We led him out to the driveway all the while he’s saying, “No way, no way!” and feeling for the car that he thinks is there. Very mean, I realize that now. TWISTED…


ME: Sorry about that by the way.


ME: Do you blame me for anything that's happened in our life?


ME: Wow that’s good; I was worried about that one.


ME: Are you glad that you have me for a sister?


ME: What would you do without me?


SEAN: (sigh) I would be very, very lost. I don’t know why you have to ask questions like that?! I don’t like to think of those kinds of things.


ME: How old were you when you first started doodling on yourself?


ME: WOW! That's bad. Was “ROLLIN’” your first tattoo? Tell us what does ROLLIN’ mean?


SEAN: Yup, (laughing hard) Wow are you serious, put a question mark, that was a long time ago, I hate you.


ME: Boxers or briefs?


ME: How many things of mine have you broken?


ME: Are you still counting?


SEAN: (LAUGHING). You always loan me old,worn out stuff.


ME: Uhhh…I don’t ever loan you “old” stuff. In fact it’s usually brand new when I end up lending it to you.


SEAN: Well then I find the defects in all the new stuff that you buy and then lend me.


ME: I think you’re a wonderful Daddy.


ME: Did you break my weed eater too?


ME: What’s your favorite memory of you and me? It can be from any time in our lives.

SEAN: AAHH! I would have to say, I don’t remember but I remember. (Laughing) Are you typing everything! That sucks. It’s a…I don’t know it’s not even a memory It’s when we pulled up to Grandma Shirley’s. Odie (our family dog, best dog in the world!) was with us we were in Dad’s big blue truck and it was snowing huge flakes and we played in the snow in Grandma's driveway under that huge street light that they had. And another one, and another one. When Dad would leave for work and we would start his three wheeler and ride it or we would try to ride the horse. Who’s horse was that anyway?


SEAN: Did we ever feed it? I remember it being just tied up to a pole in the back yard.


SEAN: WOW! (Theme to the Beverly Hillbillies now playing in both of our minds.)


ME: How would you describe our family to everyone?


SEAN: Which part of the family? HMMM….No remorse! (LAUGHING) at any time, ever.


ME: How does it feel to be married now?


ME: Do you remember being chased by the cows off of that butte in the mountains that one time?


ME: I’ve had a healthy fear of cows ever since.


SEAN: Those were scary cows!


SEAN: (imbarrassed he whispers, “like what” as if you all could hear him.) What? I thought this was a live cam feed.


I love my brother I hope you enjoyed meeting him. Please note: our family, and us too, have a humor like none other. We are a family that laughs constantly at each other as well as at ourselves and sometimes others as well. This is who we are. We are an imperfect family who are there for each other through good times and bad and we’ve had our share of both. Upon meeting us many people are at first intimidated because we’re quite the presence in a room. You can’t miss us; we’re the people in the corner of the pizza parlor scream laughing with tears running down our faces re-telling old stories about each other and as far as we know we’re the only one’s there.


**Stay tuned to hear the story next week. It involves my sweet Grandma, her ashes, a friar? (you know like from Robin Hood), counterfeit money and a crooked wig. Oh my gosh! You may never return. Above all else love your neighbor as yourself... and so we do.