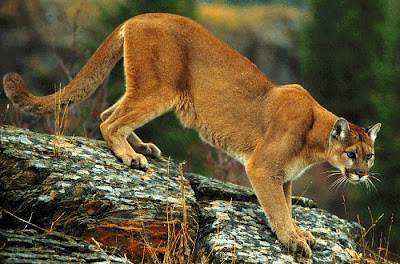 So, my dad called me, finally, from Elk camp today. Steve hasn't been able to get cell service from way up there so they went to the only place they could find to call out. I knew they were fine, but it was so nice to finally hear from them.

It's just, I wasn't quite prepared for what I was about to hear...Every one's fine so don't fret but...well, Steve was attacked by a cougar. I didn't believe it at first, but it's true! Let me repeat that- Steve, my husband. Was. Attacked. By. A cougar!!! A Mountain Lion, Puma whatever ya'll call it, it's all the same. Big CAT!

Let's go back a few years to the last time Steve was up in the same area they are in now. He heard horror stories of some of the men in my family getting stalked by cougar. Keep in mind these men talk about it in a matter of fact kind of way. These stories only created a deep rooted fear of cougar for Steve and everyone knew of this fear. Since cougar attack from the back, Steve would walk almost backwards down the trails, with his gun in hand of course. It made my dad laugh. Hard. So they named Steve "The Cougar Kid." This name even comes up on my dad's cell phone when Steve calls it!

Apparently today Steve was up in the trees, hunting, when he got the call that my grandpa had killed an elk. So he headed back to the truck to go and help pack this elk up the mountain. He says that he kept hearing something behind him, thought to himself, "was that a cougar? Na! I'm just paranoid." But he kept hearing it. So, he decided to take a path to the road just in case it was a cougar he'd have more room to move, no, run or something. But he really didn't believe that it was, but just in case...

When he was almost to the truck, sure enough, a for real-deal, COUGAR came running out of the bushes to attack him. The cougar was so close to making contact with Steve, he had no time to pull his rifle up to his shoulder so he shot it from his hip! My dad says it was a really big cat, weighing approx. 175 pounds. He said that it was actually skinny for it's size (hungry?) and that if it was normal weight it would have been well over 200 pounds!!! HOLY SHAMOLEE!

Oh. My. Goodness! The Cougar Kid's worst nightmare came true today. I can hardly believe it! Thank the Lord he's alright and that Bubba wasn't with him! Thank you Jesus!!!

Although I don't have them now, when they get back on Tuesday or Wednesday I will be posting all the pictures that have captured the man and the cat! I can't wait.