Holy Shamoly its been forever since I've been on here! My internet connection isn't the greatest which is why I'm not posting as often, slow satellite internet=a very frustrated, impatient me! I'd hope to post more than this though! I miss my bloggin' peeps:) 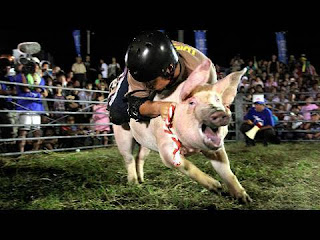 I have too many stories to tell in just one post. My life lately is full of pig rodeo's and escapee horses! "I need no gym, I live on a farm" is my new motto.

Let me just say that my darling Steve has been at work each and every time the animals have escaped, I'm starting to feel like he's in a tree somewhere filming me and the ridiculousness while laughing hysterically! Reality TV?

The last pig rodeo was quite exciting! The little piggy's had got out 2 times before and it wasn't a very big deal to get them back in. So, I figured this time would be the same. I told the kids to watch the pigs while I attempted to fix the portion of the fencing they were escaping from.


I quickly realized it was going to take longer than I had first thought. Things weren't working out as smoothly as planned, and I was getting very frustrated! Cuss words were making their way to my lips when I hear the Bub yell, "Mom! My pig is getting in the field!"


So I run out of the pig pen, into the field to try to stop this terror, just as my horses come galloping up. I've been warned multiple times that horses can sometimes react negatively to pigs and kick them and ultimately kill them. So, I run towards the horses flailing my arms yelling the magic words, "h'ya, h'ya!" They get all frisky and trot around the pond. In the mean time Bubba's little piggy, Hoss, is trying his darnedest to go towards the horses, stopping every now and then to nibble horse poo! EW!


I'm running, dashing here and there, maybe abusing the pig a little with the stick, and the blankety-blank thing is not budging. He was faster and stronger than two days prior. Finally, after the horses coming over once more, and going through the whole thing over again, we finally managed to get Bub's pig in the pig pen, which still wasn't finished. * At this point completely out of breath and starting to wheeze*


Then, I hear little Miss Abbie saying, "Mommy, I can't keep him over here any more!" Sure enough here he comes, pig #2, or Duke as he's formally known, running toward me. Would you believe that that danged pig did the exact same thing that Bub's pig did. I was chasing, he was running every direction, dodging me, then here come the horses running over to us, I was yelling, blaming the kids a little, cursing my husband for not fixing the right portion of the fence (long story) basically acting totally irrational...*Deep breath in* Finally got 'em both in, and now to fix the FENCE!


I had to snip a piece of metal rod to fix the fence, I swear I was sitting on the dang snippers with all my might and NOTHING was happening! Some how, sweating and breathing hard, I finally got it. Now I had to hammer it into the ground, while holding the board, blah blah blah. BAM! I hammered my hand, not once but twice. Awesome...


After much frustration and growling, I finally got it fixed and they haven't got out since. I apologized to the kids for screaming and acting like a crazy person, and also to my husband for being angry with him, and basically blaming him a little when he wasn't there to defend himself. You see, days before, after the pigs got out the second time, he fixed the entire pig pen when I wasn't home, and he was so proud:) Well, when I went out to see his job well done, and found that he has fixed every side of the pen except where they were getting out! Don't ask, because I have no idea how, or what, or..?

Well, there ya go, a snippet into my world lately! Yep, I'm a pig wrangler traveling the rodeo circuit! There are pictures to come soon, again my internet/computer are driving me to a sinful place that I musn't go so I'm taking a deep breath, sayin' a little prayer and moving on. Ya'll come back now!