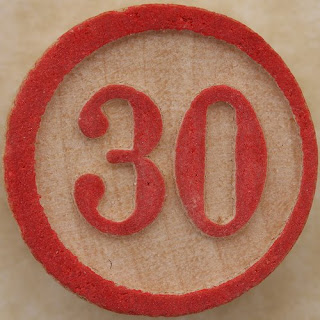 Oh my goodness that is. I know it's really not that big of a deal but kind of. It's halfway to 60, it's ten years from 40. It's how old my mom was when I was in 10th grade. Can you believe how young she is!?

So I was looking at the calendar and I relized that I only have 16 more days until my 20's come to a close and I begin a new era into the 30's! WOOO!

I thought I'd review some of the major events in my life this last 10 years...

1998- I had been married for almost 2 years. Austin was almost 1 year old! We had moved 4 times already! I worked at Costco and one night my mom came through my line with a pregnancy test, it turned out she was pregnant and she had my little sister, Elliyana, in this year!

1999- I found out that I was pregnant again with my sweet girl! We hosted our first huge Thanksgiving dinner at our house. Let's see, I think we had about 16 of us there. It was wonderful! But I was so tired afterward being pregnant and all. Oh and we moved again this year. What I found something really cute!

2000- Our little big haired girl was born. I'm not kidding it looked like she had a total wig on!

2001- I found out that I was pregnant again, Abbie was only 9 month old! I was so excited, Steve was a little scared but when that wore off he was excited too! We moved again! To a different city this time. 9/11 happened. I'll never forget it, it's also Steve's birthday. I had Emelie. Another girl born with a huge full head of hair! My grandpa died from a heart attack. It was very shocking and sad. My little cousin, Michael, who was 9 years old also died this year from cancer. Michael had been in a lot of pain at the end, he couldn't walk and could barely open his eyes. My grandma was there that day and she said all of the sudden Michael opened his eyes wide, looking past everyone like he didn't even see them and a huge peaceful smile came over his face and that was his last breath. I believe he saw Jesus standing there ready to take him home.

2002- I'm embarrassed to say this but, we moved again, back to where we are from. We stayed a year and hated it! We got the opportunity to move back to we took it.

2003-2005- Not much happened, no more babies born or anything. Oh but did I mention we again moved in 2005 but this time it wasn't our fault the house we were living in was being sold...

2006- This is getting embarrassing but holy cow we moved again! To the town we're living in but this time the company that Steve works for Moved Everything For Us! It was heaven. My grandma died, very sad but her funeral was the best funeral that I've ever been to. More laughter than you would believe!

2007- We bought our first house, Finally! Oh no, that means another flippin' move!!! We bought it right before the market dropped and everything went to the pooper! So basically we're currently paying more than it's worth, AWESOME! Grrr...We're thankful for what we have, that's just the way the fish fry around here! (I think I just made that up, you know instead of that's the way the cookie crumbles. I'm notorious for adding in my own words for those sayings. I never can remember the real ones so I make 'em up! HEHE!)

2008- I started blogging, HURRAY! Haven't moved yet! :) I'm turning 30! My family are all healthy and wonderful, I am blessed beyond measure. I'm thankful for all things even though all things haven't been easy. I guess I can turn the big 3-0 this month. Can you still wear pony tail when your 30? :)