We recently got new phones, and for the same price we were paying we were able to get three phones plus some other add-on's like Internet,etc. Thank you Verizon! Anyhow, since we don't have a house phone we figured the third phone would act as our house phone for the kids.


Steve picked up that "house phone" the other day to find that there were like 16 missed calls! No one has this number mind you, so who in the world could it be?


After some investigating, we found that my son and his friend had texted Soulja-Boy. Apparently in one of the songs, "Kiss me Through the Phone" he gives out his number. *EHEM* My. Son. Texted. Soulja. Boy! Seriously??


This text message apparently put that number on some list, and the darn thing won't stop ringing!


I told Steve to go easy on the poor boy, after all I tried to call Tone-Loc when I was around his age, and I'm pretty sure I got through but whateva! Nothin' but a thang.

Bailey's doin' good. I've been riding her everyday. I'm VERY sore from it. It could be that I'm practically doing the splits when I ride her, she's so fat! But the more probable cause is that I'm sort of out of shape:) 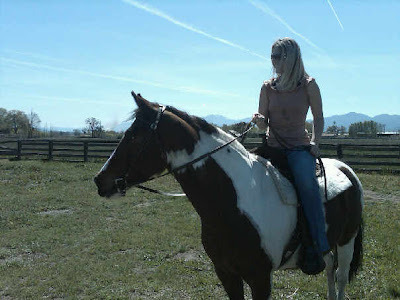 It was 94' here yesterday! We all have sunkissed faces, I love the sun! Happy Spring!