I just realized that I haven't introduced our newest edition, Mungus, AKA Cheech, AKA Maneechi, AKA The Maneech, AKA Cheecha-mungus.
I'm not kidding people, we seriously do call him by ALL of these names *we are weirdos*.
So here is his short sort of long story.

{Cheech Everybody, Everybody...
Meet Cheech!} 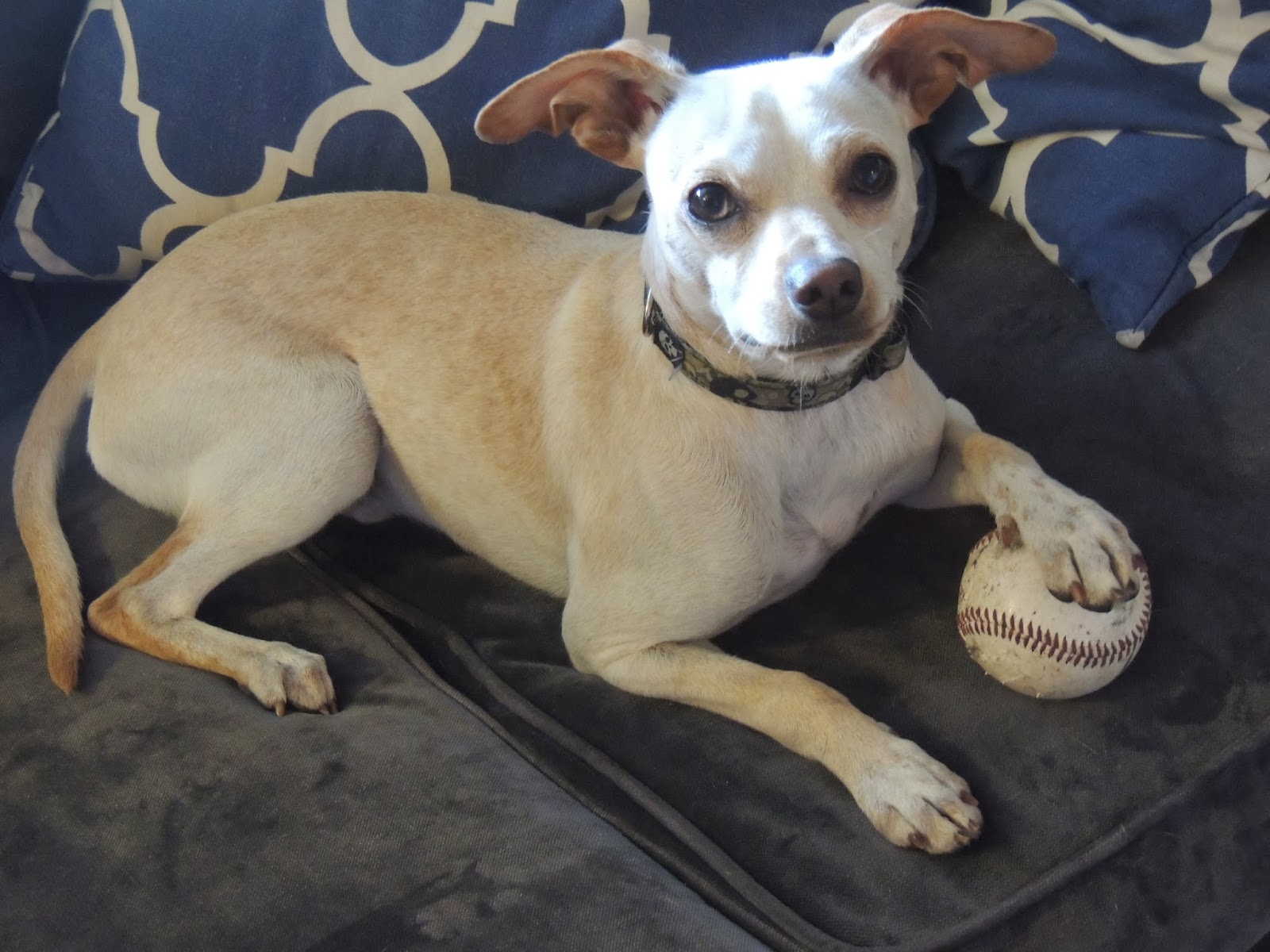 Once upon a time, on a very hot summer afternoon in July, a week after sweet Dozer went to be with Jesus (very sad), we were just getting home from watching Bub's football practice.
We were getting ready to turn the corner onto our road and I saw two cars lined up in both lanes.  I thought they were getting ready to race or something?  haha!  As we got closer we saw they were actually trying to lure a small yellow dog out of the road but the dog was not having it.  We carefully went around the cars, turned onto our dirt road driveway and went on with our night.

The next morning I was up early,coffee in hand of course and as I was headed out the front door to see the sunrise, there he was!  The same little yellow dog from the road was sitting in the middle of our driveway just staring at me, as if he knew I'd be there. Seriously it was weird, he was waiting for me...In my sweetest voice I say "Hey there little fella" to which he replied with a lightening fast run clear a-stinkin'-round our 20 acres. Seriously, I'm talkin' cheetah speeds folks, fo' reals!! 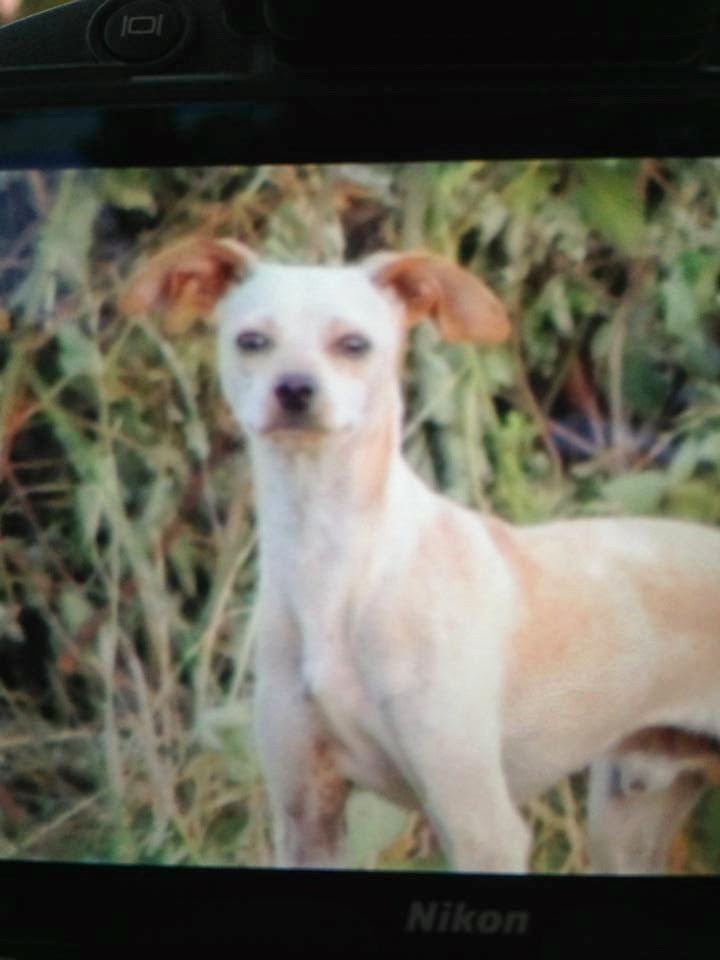 {This is a picture I took of him to post a lost & found post on Craigslist. It's distorted because I had to zoom ALL the way in, he wouldn't let me get any closer}

I tried my darndest to catch him but this little guy was un-catchable, but at the same time he wouldn't leaven our property...
Everyday I would put water and food out for him. Every morning, I would look out the front window and there he would be staring back at me.  I would go out with a leash hidden behind me and try to get close enough to lasso him up, but just as quickly as he was in front of me, he would run around the 20 acre field and be behind me again! This little scoundrel was no dummy! 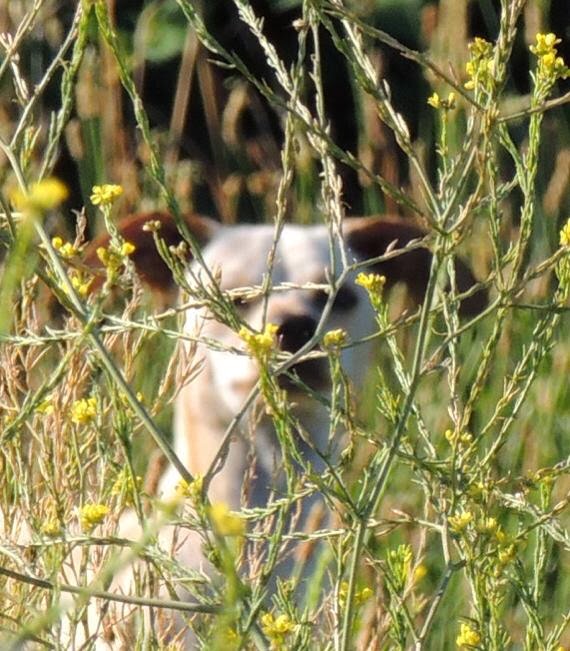 {Here he is making sure I didn't get any closer}

So, I borrowed a live trap.  I set it out every night after dinner, using our left overs as bate.  I'd set it, go back and sit in the front yard sip my lemonade, watch and wait.  It was bound to work, right?  Well, not so much.
That little scoundrel would walk into the trap, eat the food and then back out before the door would slam shut! He ate good too!  Sloppy Joes one night, chicken, hot dogs...He loved it, a little Houdini! 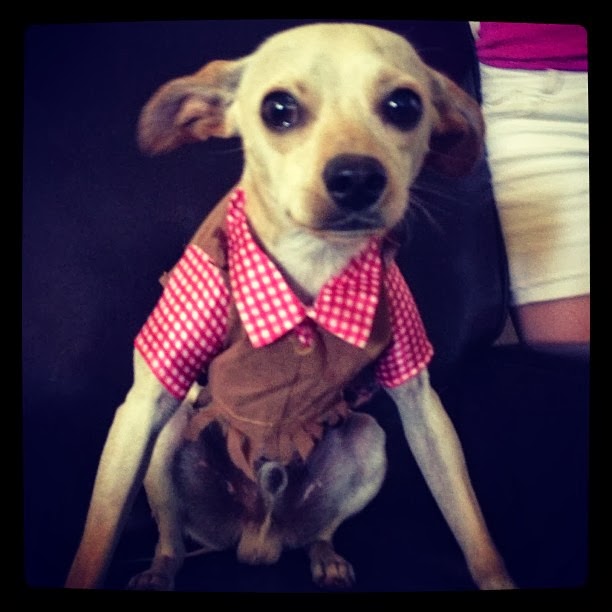 Then, at last, Meme's friend was dropping her off from a sleep over.  After they dropped Meme off, as they were headed back down our driveway I saw them brake.  Then I saw him, in his usual place under the giant tree in the shade (Pine or Cedar I can't remember?) in the south field. Her youngest daughter (7 yrs old) hopped out of their car and that little yellow dog shamefully and meekly walked right up and hopped into her arms!  I was FLOORED!  I ran to them laughing in total shock!  Thanking this sweet little animal whisperer for finally catching my nemesis.

We immediately noticed he had a ton of ticks literally hanging off of him *ew,ew,ew* so I got all 16 ticks off of him and the girls gave him a bath.  This is him right after his bath, you can see the marks where the ticks were...Poor boy... 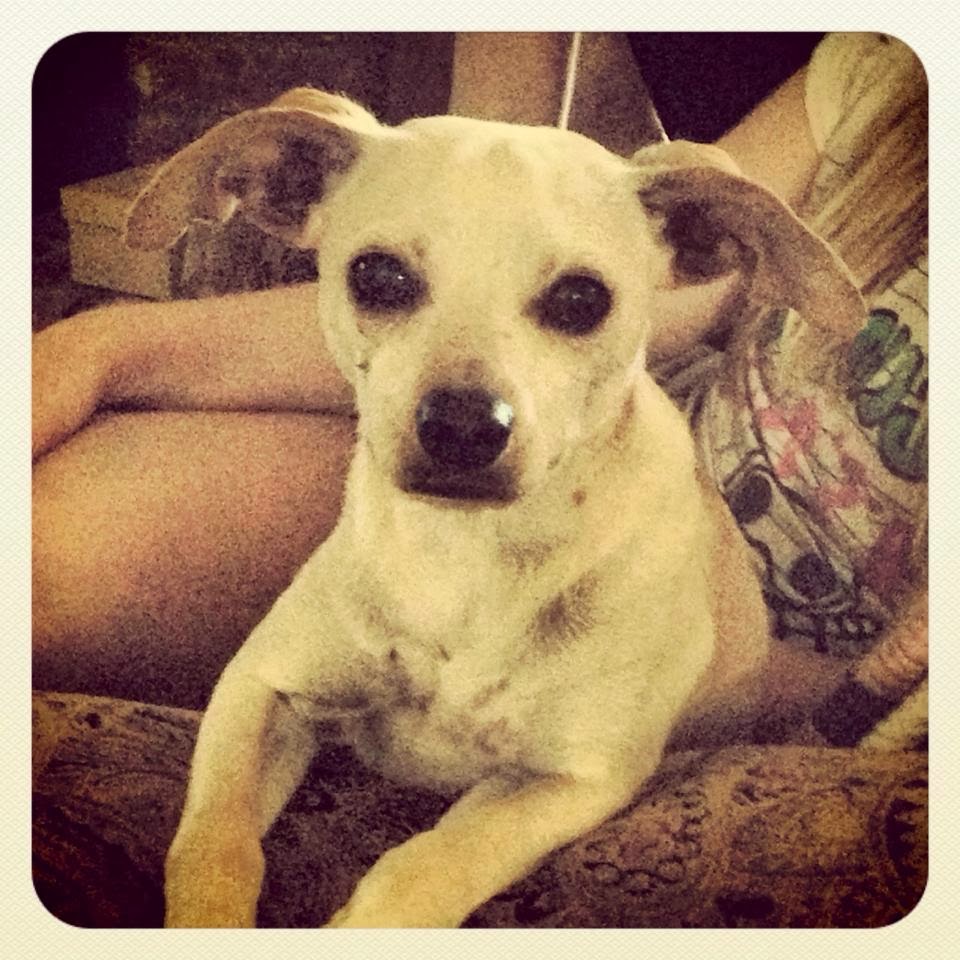 No one ever claimed this sweet little Chippet (Chihuahua/Whippet). After taking him to the vet, getting him fixed, and up-to-date on all his shots we found out he was only about 9 months old when we found him!  We love this little Chippet so much and we still miss you Dozer!

{Diego and Cheech brothers from other mothers} 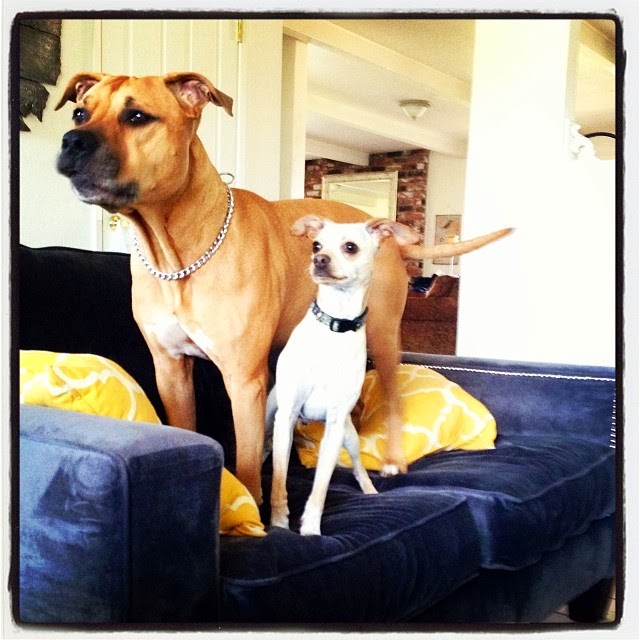 Here's some posts featuring our sweet Dozer, I still have a very hard time looking back on them, but I'm so thankful for all the years we had with him and I absolutely know that we will see him again in heaven...I believe!
Sweet Dozer Rose
Marley and Me
He Promised